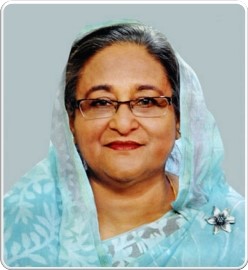 Sheikh Hasina, the Prime Minister of the Government of the People’s Republic of Bangladesh, assumed office on 7 January 2019 for the fourth time after the grand alliance led by her party Bangladesh Awami League won parliamentary election on 30 December 2018. She became prime minister for the first time on 23 June 1996 when her party Bangladesh Awami League acquired majority in the general election held on 12 June 1996.

After the term, conspiracy designed by the then caretaker government led Bangladesh Awami League to a lose in the general election in 2001 and Sheikh Hasina became the leader of the opposition again. A military-backed caretaker government took over the office in 2007 as the BNP-Jamaat government failed to hand over power in a peaceful manner in 2006. After two years in the office, the caretaker government organized the 9th general election on December 29, 2008. Sheikh Hasina’s party earned a landslide victory with a two-third majority in the widely acclaimed free and fair election leading her taking over the office of the prime minister for the second time on January 6, 2009.

Earlier, Sheikh Hasina played crucial role in establishing democracy in the country when she won from three constituencies in the parliamentary election in 1986 and was elected leader of the opposition. Following the election of 1986, a constitutional process began in the country ending the martial law.

She led the historic mass movement in 1990 that toppled the government of Ershad who resigned on December 6, 1990.

Following the election in 1991, Sheikh Hasina became leader of the opposition in the country’s 5th parliament. She steered all the political parties towards changing the presidential system of government into a parliamentary one.

Sheikh Hasina initiated a mass movement against the voter-less election by BNP in 1996 and forced the government of Khaleda Zia to quit power on March 30, 1996.

Sheikh Hasina is a staunch crusader against fundamentalism, militancy and terrorism. Assuming the office on January 6 in 2009, her government enacted laws leading to constitute the International Crimes Tribunal (ICT) for the trial of crimes against humanity done during the liberation war of Bangladesh in 1971. The tribunal began the investigation and prosecution of the suspected war criminals and a number of verdicts has been given and executed.

Sheikh Hasina, the eldest of five children of the Father of the Nation Bangabandhu Sheikh Mujibur Rahman, was born on 28 September 1947 at Tungipara in Gopalganj district.

She graduated from the University of Dhaka in 1973. She has a checkered political career. She was elected vice president of the Students Union of the Government Intermediate Girl’s College when she contested as a candidate from Students League. Later, she served as secretary and then as president of college unit of Student League.

She was also a member of Students League in Dhaka University and became the secretary of Rokeya Hall unit. She actively participated in all mass movements from her student life.

Father of the Nation Bangabandhu Sheikh Mujibur Rahman along with the members of his family was brutally assassinated on the fateful night of August 15, 1975. Sheikh Hasina and her younger sister Sheikh Rehana were the only survivors as they were in West Germany at that time. Later, she went to the United Kingdom from where she started movement against the autocratic rule in 1980. Sheikh Hasina was unanimously elected as president of Bangladesh Awami League in 1981 in her absence while she was in forced exile. She finally returned home on May 17, 1981 ending her six years in exile.

Sheikh Hasina faced the wrath of the rulers on her return as she launched movement to restore democracy in the country. She was detained time and again, and at least 19 attempts were made on her life so far.

The military government interned her for 15 days after arresting on February 15, 1983. She was under house arrest twice in February and November in 1984.

Sheikh Hasina was arrested again on March 2, 1985 and was confined for three months. She was again arrested on October 15, 1986 and left under house arrest for 15 days. Later, police arrested her on November 11, 1987 and interned for a month.

She was detained again on February 27, 1989 and November 27, 1990. The military backed caretaker government arrested Sheikh Hasina on July 16, 2007 and confined her at a sub-jail set up on the parliament premises. She was released on June 11, nearly after a year.

Notable attempts to assassinate Sheikh Hasina include firing by police on November 10, 1987 during a ‘gherao’ programme of the Secretariat. Juba League leaders Nur Hossain, Babul and Fattah were killed in the incident. An attempt was made to lift the car with a crane along with Sheikh Hasina in front of the National Press Club.

Police opened fire targeting Sheikh Hasina and charged batons in front of Chittagong Court Building on January 24, 1988 during rule of president Ershad. At least 30 leaders and workers of Awami League were killed in that incident. Twice she was targeted with gunfire while delivering speech at Laldighi Maidan. Her car was come under gunfire while returning from the public meeting at Laldighi Maidan.

During BNP’s regime, Sheikh Hasina repeatedly confronted gun attacks. Miscreants fired on September 11, 1991 while she was visiting a polling centre in the capital’s Kalabagan area. A series of gunshots hit her carriage at Ishwardi railway station while she was traveling by train in 1994. In 2000, two bombs weighing 76 kgs and 84 kgs were planted at Kotalipara helipad, and at her place for public meeting in a bid to kill her. She survived as the bombs were detected prior to her arrival. The gravest attempt made on Sheikh Hasina’s life was on August 21, 2004. On the day, a dozen of Arges grenades were charged on her rally at Bangabandhu Avenue. Although Sheikh Hasina narrowly escaped, the gruesome attack left 22 leaders and workers of Awami League dead, including central leader Ivy Rahman. As a consequence, Sheikh Hasina’s hearing capability was impaired.

Sheikh Hasina continued her struggle and remained undaunted to ensure people’s right to food, vote and other fundamental rights ignoring numerous obstacles, including threat on her life. Under her leadership, people of Bangladesh achieved democracy and freedom of speech. Bangladesh earned the dignity of a lower middle-income country.

The country achieved tremendous success in socio-economic fronts during her tenure. In 1996-2001 term, Sheikh Hasina’s government achieved laudable successes in many fields, the most significant being the 30-year Ganges Water Sharing Treaty with India; the Peace Accord on Chittagong Hill Tracts; construction of Bangabandhu Bridge; and ensuring food security. She also introduced beneficial programme for farmers, and social safety nets for the distressed, landless and deprived people. These include allowances for distressed women, widows, disabled and freedom fighters; Ashrayan for the homeless and “One house-One farm” scheme.

During her term in 2009–13, Sheikh Hasina’s government’s achievements included increased power production capacity to 13,260 MW; GDP growth over 6%; elevation of 5 crore people to middle-income group; resolving maritime boundary dispute with Myanmar and India, digital centers at all union parisads; distribution of free text books among the students upto secondary level, distribution of agri-cards and scope to open bank accounts with Tk 10 only for farmers, slump in poverty level to 24.3 percent in 2013-14 which was 38.4 in 2006; and adoption of her peace model by  UN resolution.

Different reputed universities and institutions across the world conferred various degrees upon her for the outstanding contribution to peace building, upholding democracy and socio-economic development.

Sheikh Hasina was also honoured with awards for her outstanding contributions to social work, peace and stability. These include: UNESCO’s Houphouet-Boigny Peace Prize 1998; Pearl S Buck Award 1999; CERES Medal by FAO; Mother Teresa Award; MK Gandhi Award; Paul Harris Fellow; Indira Gandhi Peace Award 2009; Indira Gandhi Gold Plaque in Kolkata; Paul Haris Fellow by the Rotary Foundation of Rotary International, Medal of Distinction in 1996-97 and 1998-99 and Head of State Medal in 1996-97 by the International Association of Lions Clubs, Global Diversity Award in the UK; and two South-South Awards. UNESCO honoured her with “Tree of Peace” in recognition of her outstanding contribution to promotion of girls’ and women’s education on September 8, 2014, Award for Regional Leadership in Women’s Political Empowerment by Women in Parliaments Global Forum and Visionary Award by Global South-South Development Expo-2014.

She was conferred on the United Nation’s highest environmental accolade ‘Champion of the Earth Award 2015’ in policy leadership category for her forefront role at home and abroad to face the adverse impacts of climate change. The International Telecommunication Union gave her the ‘ICTs in Sustainable Development Award 2015’ for her outstanding contributions in spreading information technology in the country.

Sheikh Hasina has authored several books, including Sheikh Mujib is my Father, Why are they Street Children, The Origin of Autocracy, Miles to go, The Quest for Vision 2021 (two volumes), Elimination of Poverty and Some Thoughts, People and Democracy, My Dream My Struggle, Development for the Masses, Sada Kalo (Black and White) and Sabuj Math Periye (Crossing the Green Field).

Sheikh Hasina is the Chairperson of ‘The Father of the Nation Bangabandhu Sheikh Mujibur Rahman Memorial Trust.’ She believes in democracy, secularism, inclusive growth and progress, and dedicated her life to eliminate poverty and barriers that marginalize people. Her interest is in technology, cuisine, music and reading.

Sheikh Hasina’s only son Sajeeb Ahmed Wazed is an ICT expert. Her only daughter Saima Hossain Wazed is a psychologist and has been working for the betterment of autistic children. She has 7 grandchildren.