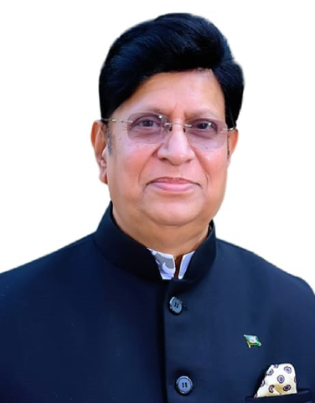 Professor Dr. A. K. Abdul Momen has a PhD in Economics and an MBA in Business Administration from the Northeastern University (Boston), an MPA in Public Administration, Public Policy and International Economics from the Harvard University (Cambridge), an LLB in Law, an MA in Development Economics and a BA (Honors) from the University of Dhaka. He passed HSC from M.C. college, Sylhet and SSC from Sylhet Government Pilot High School.

He worked as an Economic Adviser (Consultant) at the Saudi Industrial Development Fund under the Saudi Ministry of Finance and National Economy as an expert. Also he worked for the World Bank, Washington DC [1981-83] and as a UNDP consultant, New York, 1989.

In addition, Secretary General Ban Ki-moon selected him as a member of his Senior Advisory Group of Troops Reimbursement (2012). His country was also included in SG’s “He for She’, “Education First”, “Health and Nutrition Champion”, “Public-Private Partnership”, etc. initiatives. In these leadership roles, he has consistently demonstrated sound judgment, innovative-thinking and political sensitivity to deliver results, often under very difficult circumstances. As a skillful negotiator and team-player, he spearheaded consensus resolutions on LDC issues in the Istanbul LDC IV Conference (2010), at the Rio-plus 20 Conference (2012), and also in the 2nd Committee.

While at the UN, Dr. Momen has a good rapport with the UNDP, UNICEF, DFS, DPKO, UN-Women, UNFPA, and other UN Agencies and with UN Senior officials. He was known among his colleagues, the PRs of UN as the ‘Consensus Builder’. He has leadership experience with strategic vision and skills to manage divergent interests. He is committed to help improve the life and liberty of the poor and the oppressed and the most vulnerable ones. He has proved himself as a responsible, sound and committed leader who has the ability to face challenges.

He helped to improve the image of Bangladesh as a ‘model of economic development’, a ‘star of women empowerment’, a ‘leader in disaster preparedness program’, a ‘brand-named in UN Peacekeeping’ and a ‘standard bearer of the South’. During his tenure Bangladesh got elected to nearly 52 UN Committees, Commissions, Bureaus, Groups, etc. and never lost any election. He assisted in developing solid relationship with member states. He purchased a Permanent Office for the Bangladesh Mission and also a Permanent Residence for the Bangladesh Permanent Representative in New York, while setting up a Bangladesh Lounge inside the UN Building.

After his retirement as a Professor Emeritus from Framingham State University (USA) and also as a Bangladesh Ambassador and PR to the UN, he joined as a Faculty at the American International University of Bangladesh (AIUB). He is serving as the Honorary President of Bangabandhu Foundation, a world-wide NGO, as Chair of the Chittagong Stock Exchange that upholds stake-holders interest and assist in smooth transactions, as Chair of the Bangladesh Study Trust (BST), a Think-Tank and Chief Adviser of the Journey, ‘London 1971’ Social organizations besides attending Talk-shows as a guest and delivering lectures.

The first bullet against the occupation Pakistan Army was fired in Sylhet town from his house at 1, Dhupadighi-East (currently Hafiz Complex) and as a result Pak Army destroyed his house and afterwards, he had to take shelter at Fulbari, 10 miles away from Sylhet town. On April 20, 1971 after the Boitikorer juddo in Fulbari, he was captured and tortured by the Pakistani military forces.

He left his job at the Commerce Bank of Pakistan, Motijheel C/A, Dhaka on March 1, 1971 immediately after the announcement of the postponement of the National Assembly of Pakistan in Dhaka and joined the liberation movement. In India, he worked at the office of Dewan Farid Ghazi, MNA, Regional Civil Administrator for Eastern Zone for some time and after independence, he rejoined as his Private Secretary when he became a State Minister of the government of Bangladesh.

A. K. Abdul Momen initiated, designed, developed and implemented a public policy popularly known as the Wage Earners’ Scheme (WES) in 1973. It was a success story. It reduced the scarcity of essential consumer and industrial goods and their prices in the country, and at the same time, it facilitated inflow of scarce foreign exchange. Through this mechanism, one-third of the total annual foreign exchange of the country was received for few years

Dr. Momen published and presented more than 250 papers. He attended many forums as an invited speaker, and chaired professional sessions. He traveled many capitals of Asia, Europe, Africa, Australia, North and South Americas mostly on government/official duties. Attended and also presided/chaired sessions/conferences/meetings of the UN-DESA, ECOSOC, UNCTAD, ESCAP, EEC, IMF, World Bank, UNO, FAO, WTO, besides inter-governmental bilateral and multinational ministerial meetings as a delegate. He also participated/presented/chaired many academic sessions and conferences and delivered keynote speeches across the globe. He also deliveded Commencement Speech in graduation ceremonies.

His write-ups (1) titled “Silent Heroes of Our Time’ (how a Christian and a Hindu saved a Muslim girl from death) published in the MetroWest Daily on November 10, 2005; (2) his write-up on ‘Modern Day Slave Trade in the MetroWest Daily on January 9, 2005, (3) ‘Plight of Bangladeshi Expatriate Workers’ in the Arab News, Riyadh (2003), (4) his article titled “Terrorism before and after 9/11’ published in Metro West, Boston and his write-up on (5) “The nominee of the OIC Top Job’ created widescale debate and public attention.

Dr. Momen has a log history of taking bold initiatives, often to help the poor and the disadvantaged. For example, he picked up the case of ‘trafficking of women and children into slave like servitude’ and ‘child labor’ in early 1990s and he succeeded in reducing trafficking especially camel jockeys in the Gulf countries. There were number of hearings on child labor and slave trade trafficking in the US Congress and the US Commerce Dept where he participated and eventually it resulted in a model arrangement to help children/families. When he was in Saudi Arabia, he picked up the issue of ‘abuse of expatriate workers in the oil-rich Middle East countries’ and succeeded in promoting and protecting the rights of expatriate workers. The WTO included a new provision to prevent abuse of expatriate workers in the Middle East plus many Arab countries became more sensitive to the issue. Because of his humanitarian works, he received many awards. He was President of Women & Children International (WCI), Inc., a Boston-based ‘not for profit’ Humanitarian organization. It was instrumental to repatriate and rehabilitate a few minor boys, all below the age of 5, from being sold as camel jockeys in the Gulf countries. WCI [along with others] successfully lobbied in passing two bills in the US Congress on ‘sexual exploitation of minor children’ and ‘genital mutilation of minor girls’. It was also successful in pursuing the Heads of SAARC countries (Bangladesh, Bhutan, India, Maldives, Nepal, Pakistan and Sri Lanka) to incorporate the issue of trafficking of women and children at their Summit Meeting and in setting up of a Fund to help the victims. It arranged US Congressional Hearing on ‘Asian Slave Trade’.
Dr. Momen received the prestigious ‘Human Rights Award’ from Human Rights groups of New York in 2015, ‘Our Pride’ Award from Bangladesh-America Foundation Inc., Washington DC in 2005 the ‘FOBANA Human Rights Award’ in 2004, the ‘Mukto Gaaner Pakhi’ Award from Morupolash, Riyadh, Saudi Arabia in 2003, an award titled ‘Friend of the Poor” presented by the Probani, New York, 1993, a ‘Humanitarian Award’ of the North America Bangladesh Medical Association in 1995, ‘Gentleman of the Year Award’ from the Women Empowerment, FSU in 2007. “Home Town Hero” citation from the Eagle Tribune (Daily), received “Ambassador of Goodwill” citation from the Governor of Massachusetts in 1989.

His wife Selina Momen is a health-service professional. They are blessed with three daughters and two sons who are American expatriate and well established in their own profession. His father Abu Ahamad Abdul Hafiz was a prominent advocate. He was convenor of ‘Sylhet Referendum’ through which Sylhet became a part of Pakistan in 1947. His mother Syed Sahar Banu Chowdhury was ‍socially aware and engaged herself actively with the development of schools and colleges. She was the President of Sylhet All Pakistan Women Association for many years. She had glorified contribution in the Language Movement.